Artists Society of Singapore is proud to announce the inclusion of its President, Mr. Ren Jianhui, in the ArtTour International’s Top 60 Masters of Contemporary Art 2013.

Ren’s Green Wind series of portraits received this special distinction, together with the greats like Fernando Botero and Fabian Perez. The selection from over 5,500 paintings short-listed was made by a panel of art critics and experts from United States, Canada and Columbia.

Green is the color of nature and according to Ren, color of permanence. The portraits of the nameless sitters in this series are mysterious and haunting. While the facial features are fading, eroded by passage of time, the nature reflected in the eyes remains lucid and penetrating.

Born in Chengdu, China, in 1956, Ren graduated from Beijing’s Central Academy of Craft and Design (now known as Qing Hua University) and was taught by acclaimed artist, Prof. Wu Guan Zhong. He is presently a member of the China Artists Association and the President of Artists Society of Singapore. Having more than 40 years of experience in painting, Ren already made waves in the arts scene before he migrated to Singapore in 1992 where he had devoted his time teaching at National University of Singapore for 7 years. His strict training in western art is evident in the technical aspect of his paintings, yet there is something Eastern and “uniquely Ren” in his expression.

Ren has distinguished himself by winning multiple awards from the Chinese government in Oil Painting, Illustration and Artistic Design, and has been recognized as one of the most notable Chinese Contemporary Artists. Ren has participated in many exhibitions all over the world, including Beijing, Hong Kong and Fukuoka. He has also held solo exhibitions in Tokyo, Singapore, New York and Jakarta, winning accolades for his outstanding works. On the international arena, Ren has also received the special honorary award at the Biennale Chianciano, Italy 2009. With his rising prominence in the arts scene, his works have also won the hearts of collectors and curators alike in recent years.

Ren is inordinately pleased with this very special and totally unexpected honor to be selected as one of the Top 60 Masters of Contemporary Art 2013 in ArtTour International. ArtTour International is a fast growing art magazine in the international market, covering Europe and the Americas. It reaches over 2.1 million online readers and targets 50,000 readers on the printed publication on more than 64 countries around the globe. 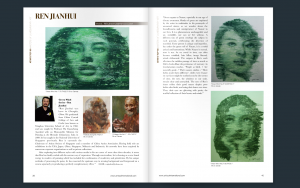